The SEQC returns this Sunday to familiar territory in terms of venue but uncharted waters as far as the quizmaster goes. Vidyadhar Gadgil, by his own admission, hasn't QMed in decades - all the more reason to expect a cracker!

SEQC Quiz 7
Date: Sunday, 30th November 2008
Time: 6.00 pm
QM: Vidyadhar Gadgil
Flavour: One rank below Field Marshall
Who can join: Anybody. Everybody who lands up has to participate, though. There are no seats in the audience.
Place: At the Gadgil-Correa's , Carona
How to get there: (From a previous post) "...come to Aldona via the Mapusa bypass. That is, instead of going into Mapusa, you turn right at Hotel Green Park (about 9 kms from Panaji).
Once you get to Aldona junction, you get onto the road to Carona-Calvim. About a km and a half from the Aldona junction, you will come to a small junction where there are a few shops. Call me when you get there. OR ask for Gadgil's house or Niyati's house (husband and daughter respectively).
Alternatively, once you get to the Aldona junction, you will see RENDEEP cybercafe. That's Savio's cafe/house. You can coordinate with him to meet up there and come along with him."
Or call Marriette on 9423889397/2293766. Or follow the Wikimapia link.
Posted by Rajiv D'Silva at 8:05 PM No comments:

Harsh's birthday celebrations must have spilled over to the next day -- November 9, which is when the SEQC quiz was scheduled -- as an SMS warned people that the quiz would start an hour later than originally planned. With various constituents not having received / read the SMS in time, the lane outside Savoir Faire was teeming with enthusiasts by the time the event was ready to get going.

The turnout, this time, was the poorest since SEQC sallied forth in June. There were just eight people besides Quizmaster #B (my mind is playing a disco theme song even as I write). It did make the team divisions simple, though. Tallulah arrived some distance into the proceedings to skew the perfect balance, but in an attractive way, of course (sorry, Rajiv, piling on is like an involuntary response with me)!

Team 1, consisting of Rajiv, Anjali and a host of doubles, began steaming ahead right from the start. Inside a couple of rounds, they had established a significant lead over the other teams, with Gadgil-Soraya in second spot, and some hard battling for bottom place between Annie-Nitash and Ameya-PD-Tallulah. Later, it came to light that some of the lower-order positioning was, like media portrayals of more or less anything these days, not quite what it seemed. Rajiv, who besides being part of the winning team was also keeping score (now isn't that a loaded statement?) had been generous with some teams' earnings, and the class struggle had, as should be expected, benefitted the followers of Marx. This redistribution of wealth was addressed at the end of the quiz, but didn't make any difference in the long run to the standings.

While the entire quiz had the excitement and quality that the SEQC quizzes have happily managed to achieve, the 'Then and Now' round was a special treat. Q#B (the theme song in my mind has now metamorphosed to a resounding Star Wars-style John Williams composition) had dug into some deep reserves and come up with some astonishing pictures of people removed from their temporal milieu. The contemporary picture of Manjunath, the actor who played Swami in the TV version of R.K. Narayan's Swami and Friends, in particular, was received with exclamations and expostulations. Not having seen the show myself -- it was in my salad days, before I turned into a couch potato -- I jumped up and down with everyone else, in order to fit in.

The final monster round of 36 questions had Rajiv-Anjali continue their mixed doubles supremacy, and they finished with an astonishing 260 points, easily the most racked up by any team in any of the SEQC sessions. Vidyadhar-Soraya finished second, well behind on what would on any other day have been a commendable score of 165 points, followed by Ameya-PD-Tallulah with 100 and Annie-Nitash with 90. This turn of events has ended up creating an interesting situation at the top of the cumulative points table, with four or five quizzers all bunched together.

The programme ended with a speech that was thrust upon PD, who got a standing ovation -- essentially, everyone stood up to leave while he was still collecting his thoughts out loud. A raucous chai-and-samosas session at Hotel Rai nearby rounded off a satisfying evening for all.
Posted by Anniesen at 10:23 AM No comments:

Announcing the kick-off of the Monginis Quiz 2008. Most details are in the poster. More details here.
Posted by Rajiv D'Silva at 5:17 PM No comments:

Blame it on the global economic meltdown or the post-election hangover, but Quiz 6 saw a lowish turnout. Which was a pity, because those that missed it missed a good one. Anjali's review will follow in due course, but here are the results:

Which leaves the league table looking like this, yours truly in the strangely unfamiliar position of league leader, helped no doubt by Annie being rather distracted by his book launch. Well, it doesn't matter how they come.... 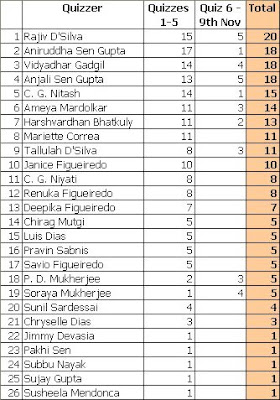 The next quiz will be held on the 14th of December, Vidyadhar to QM and host us at his Aldona home. More details in the first week of December.

This weekend, the SEQC returns to the scene of Quiz 3, with Hash promising to play the graceful host and exacting quizmaster in equal measure. It seems like a lot of water has flowed past the floating casinos since the last one, so here's a chance to pick things up after a lull of sorts.

SEQC Quiz 6
Date: Sunday, 9th November 2008.
Time: 5 pm, "sharpish".
QM: Harshvardhan Bhatkuly
Flavour: Everything under the Sun.
Who can participate: Everyone under the Sun. If you haven't participated before and need to be convinced, call me on 9890141715.
Venue: Savoir Faire office, Mala.
How to get there: If you're driving on Rua de Ourem from the Panaji side, turn right after People's High School and then take the second right that goes up to the High Court. About halfway up a steepish slope, on the right side is a double-storied building with a spiral staircase in the front, almost on the road. A short climb up that staircase should, allowing for any slight disorientation that spiral staircases are wont to produce, land you at the main door of Savoir Faire.
Here is the wikimapia link. For the geographically-challenged, call Hash on 9890983826.
Posted by Rajiv D'Silva at 12:29 PM 2 comments: