The hunt for SEQC's Junior Mastermind came to a tense climax on the evening of December 18, at the same location where the senior contest had been played out two years previously -- the beautiful setting of the Divli Lawns at the International Centre Goa (ICG) in Dona Paula. Rajiv D'Silva, who had been the Quizmaster for the entire event, set things up nicely before the contests began, with some funny introductions to the participants.

The final result may have been true to form -- with Julian D'Costa taking the title -- but the path there was anything but easy. The specialised subject round saw the four finalists arrayed close together, with just 3 points separating the first from the last.

At the end of the specialised subject round, Tarun, whose chosen topic was 'The Synoptic Gospels', was placed fourth, with a score of 10; Shubham, who had elected to be quizzed on the band 'LMFAO', was on 12; and Kunal ('The Inheritance Novels of Christopher Paolini') and Julian ('Platonic Solids') were tied at 13 each.

For the first time in the competition, one could see distinct signs of nervousness on the faces of the front-runners. 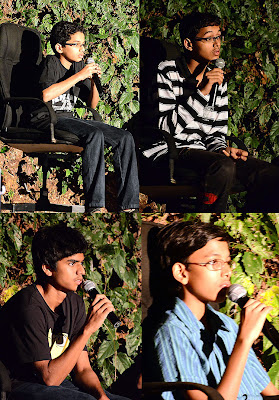 The four finalists in the hot seat.

In the general knowledge round, Tarun more or less dropped out of the reckoning with a low score. Shubham, who was up next, did only slightly better, setting up an edge-of-the-seat face-off between Kunal and Julian.

Kunal was characteristically polished at his general knowledge, setting Julian a target of 11 to win the title. For a little while, as Julian stumbled on a couple of questions, it seemed that it was going to come down to the wire, but in the end, he finished with 12 points, for a cumulative total of 25 points to Kunal's 23.

SEQC was lucky to have pulled off something of a coup, having chess wunderkind Ivana Furtado at hand to give away the prizes. Also visiting for the day, and forced into the photo op was a distinctly uncomfortable Vidyadhar Gadgil, who had been crowned SEQC's senior Mastermind two years ago. 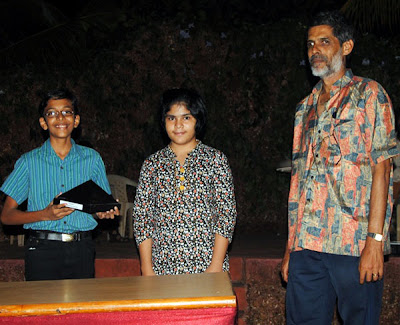 Ivana evidently enjoyed the event enough that she, along with her father, stayed back to witness the second event of the day -- the Sports Quiz conducted by Amit Shet. That was also quite a hit, with a sizeable crowd watching the six finalist teams battle it out on stage.

Ameya and Rohit, the latter attending his first SEQC quiz, pipped Annie and Gadgil at the post, winning by 65 points to 60. The young team of Shashwat and Shubham came in 3rd. 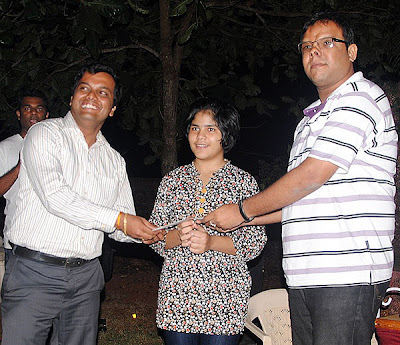 Ivana presenting the 1st prize for the Sports Quiz to Ameya and Rohit.
Posted by Anniesen at 11:44 AM No comments:

Read my lips - NO Quizzing

Date: 19th December 2011
Time: 8.00 am. Skirmishes will begin at 8.15 sharp. We ought to be finished (deliberate choice of word, that) by 9.30 am.
Venue: Caranzalem Beach. Along the stretch of beach just across from the main gate of the Goa Science Centre.
Participation: Open to all.
Posted by Rajiv D'Silva at 9:28 AM No comments:

From Thomson to Thompson

(Jeff and Daley, to be precise)

The next Panjim monthly will be held on the 8th of January 2012, to be hosted by Nitish Wagle.
Posted by Rajiv D'Silva at 11:25 AM No comments:

Posted by Rajiv D'Silva at 9:15 AM No comments:

The third edition of Mega-Whats, the KQA’s National Open Quizzing Championship will be held on Sunday, 11 December 2011.
The quiz will be held across thirteen cities simultaneously - Bangalore, Chennai, Guwahati, Goa, Hyderabad, Kolkata, Coimbatore, Mumbai, Mysore, New Delhi, Pune, Thrissur, and Thiruvananthapuram.
The Goa edition will be held at the International Centre Goa, Dona Paula.
Please register in advance to ensure good seating.
An entry form is provided here–scroll to the end of the page: http://kqaquizzes.org/megawhats/