The next monthly quiz will be held on the 4th of April, to be hosted by Ajachi Chakrabarti.
Posted by Rajiv D'Silva at 10:07 AM 1 comment:

All the questions and answers of all the Mastermind rounds (both specialised subjects and general knowledge) have been uploaded on the SEQC Google group. To access them, click on this link, and look for all the files prefixed 'mastermind' in the list of files.
Posted by Anniesen at 9:23 PM No comments:

Fourplay: Good triumphs over evil, but only just

I've always felt strange doing a review of an event at which I have played a major role, particularly struggling with the question of whether to make the write-up a faux 'objective' third-person piece, or do a gonzo-style first-person report. It would be much preferable to have someone else do these reports, but as there are no clamouring crowds wishing to take on this mantle, I am forced to continue with mein kampf. So here goes another one -- on the SEQC Mastermind finals evening -- and this one I've decided to do from an unabashed first-person POV. Also, I'm splitting the review into two parts, as each of the two events of the evening deserve their own coverage.
I had felt this was going to be a special evening, and that feeling was bolstered when I arrived at the International Centre Goa (ICG) a little after 5pm on the last day of February. Quite a sizeable crowd was already gathered on the Divli Lawns, an excellent venue for an evening of quizzing. Arjun Halarnkar, the Programmes Manager at the ICG, had as always made impeccable arrangements. Ever since I made the acquaintance of Arjun, and his boss, ICG Director Nandini Sahai, I have enjoyed working with them on events. It's such a pleasure and a relief to know that that side of things will be taken care of completely.
The crowd was quite rich in non-SEQC types, and there were also a few special guests. Victor Rangel-Ribeiro, litterateur, musicologist and Mensa member, and his wife Lea were the chief guests for the evening. Also present were Abhishek's father, who had come down from Mumbai to witness his son's foray under the spotlight, Chirag, who had arrived from Bangalore for a weekend of quizzing, and others from all over Goa.
Soon after I got there, Rajiv roared in on his Royal Enfield Thunderbird, like an extremely natty Hell's Angel. His was the opening honours of the evening. We had known that the Mastermind finals, a face-off as they were among just three finalists, would be a short affair, and rather than have everyone come there for a half-hour event, we had decided to start the evening off with a quiz developed by the D'Silva, which he had named Fourplay (perhaps a little unwisely, as he had to repeatedly use this word in its full double-entendre splendour in front of people old enough to be his grandparents).
And what a great quiz it was. Rajiv had planned it along the lines of the Davis Cup tennis tournament. A written preliminary stage identified eight qualifiers, who were split into two teams of four each. The team I was in also had Ajay Parasuraman of BITS, Nitash and -- his qualification reinforcing my belief that we had chosen the right person to have as chief guest -- the ebullient and irrepressible Victor himself. Arrayed against us were the forces of evil, in the form of the Great Satan Vidyadhar Gadgil and the junior devils Ajachi Chakrabarti, also of BITS, Adish, who was on quite a winning spree that weekend, and -- another pleasant surprise -- Augusto Pinto.
The first 'singles' pitted Ajay against Gadgil; the see-saw affair saw Ajay notching up our first win against his seasoned opponent on the tie-breaker. In the second singles, I took on Ajachi. Ours too was a close battle, but one in which we competed on negatives. Eventually, ours too went to the tie-breaker, which Ajachi buzzed in to win. The 'doubles' had Victor and Nitash representing the good, and Augusto and Vidyadhar on the side of evil. Thankfully, this contest went the way of conventional literature, and our writers got the better of their writers. We were up 2-1.
The reverse singles would have seen me up against Ajachi in the final tie of the day, so I suggested we switch things around. I went up against Adish, and managed to snag this one. This gave our team a winning lead, but the last face-off between college-mates Ajay and Ajachi was another humdinger, eventually won by Ajachi, making the final score 3-2 in our favour.
Pictures of the evening are featured in an earlier post.
Posted by Anniesen at 9:18 PM 1 comment:

Evening had dissolved into night, and the lights on the Divli Lawn had come on while Rajiv's quiz Fourplay was still in progress. Now, with the full glare of the spotlight on three people, it was time for the main event, the SEQC Mastermind finals. After four months of intermittent competition, 27 contestants had been whittled down to the last three -- Abhishek Jha, Amit Shet and Vidyadhar Gadgil.
I could see that all the three were a little nervous. Despite the informality of SEQC, and the bonhomie with which we treat each other, the Mastermind competition had certainly managed an atmosphere which was in keeping with its pedigree.
Abhishek, by virtue of the first two letters of his name, was up first. His chosen topic for the finals was 'The Life and Works of Chetan Bhagat'. He did quite well, ending with a score of 11 correct answers and 1 pass. Next up was Amit, who had deviated from the trend of his earlier topics ('The Cricketing Career of Sachin Tendulkar' and 'The Films of Aamir Khan') and gone with 'Booker Prizes' as his topic for the finals. It was perhaps not a wise choice, as its scope was quite large, and this reflected in Amit's score. At the end of his specialised subject round, Amit had 7 correct answers with 2 passes.
Gadgil, too, had gone in a completely unexpected direction with his finals subject. In his first round, he had opted to be quizzed on 'Indian Writing in English' -- very much his thing -- and then, in the semis, he had chosen 'The Films of Satyajit Ray', also not an unexpected topic. For the finals, when he asked for 'Jethro Tull' I was completely taken aback, not having expected this to be an area of interest for him. The crowd eveidently felt the same way, for there was quite an audible reaction when his topic was announced.
But Gadgil was well prepared. By the time he was through with Jethro Tull, the competition was more or less int he bag. With 17 correct answers and 1 pass, he was a clear 6 points ahead of Abhishek, and that was always going to be too much of a mountain for the young man to climb, especially given that Gadgil had also consistently gotten high points in the general knowledge rounds at the earlier stages.
When the dust had settled at the end of the general knowledge rounds, the finalists had finished in the same order as their position at the end of the specialised subject rounds, with each of them further widening the gap between themselves and their predecessors. Gadgil's cumulative score of 27 was the highest in the entire championship -- you know what they say of champions raising their game on special occasions.
Victor came on at the end, entertaining us with funny observations and enriching us with life lessons. Finally, he gave away the trophies, beautiful black pyramids reflecting the design of the SEQC Mastermind logo, which Tallulah and Rajiv had got constructed. The evening was a pinnacle of SEQC's second year of existence -- now let's see what heights we climb in our third year.
The results
FINALS
Winner: Vidyadhar Gadgil (specialised subject: Jethro Tull) -- 17 correct answers in the specialised subject (SS) round + 10 in the general knowledge (GK) round = 27 total
2nd: Abhishek Jha (The Life and Works of Chetan Bhagat) -- 11 (SS) + 8 (GK) = 19 total
3rd: Amit Shet (Booker Prizes) -- 7 (SS) + 6 (GK) = 13 total
For pictures of this evening, see the post below.
Posted by Anniesen at 7:00 PM No comments:

Fourplay/Mastermind: The evening in pictures 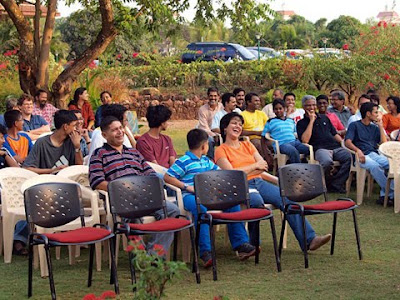 The crowd has a good time. 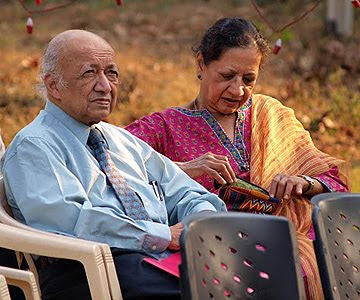 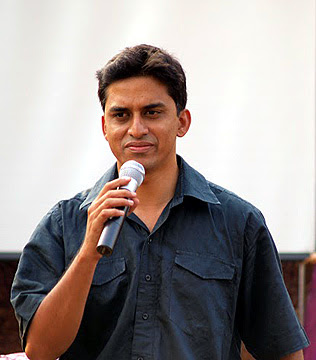 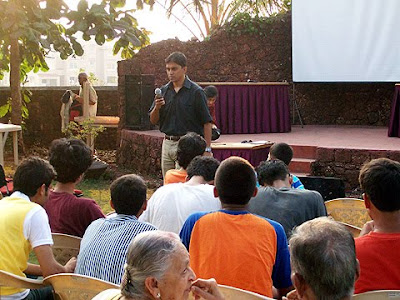 The crowd, now not having such a good time, tries to answer the prelims questions. 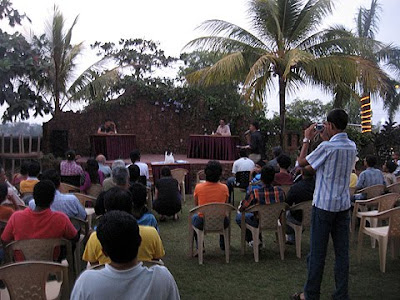 The Divli Lawns, a great setting for the evening's proceedings. 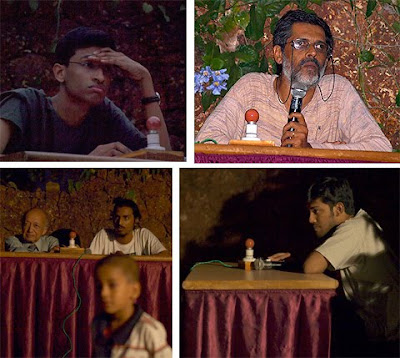 Fingers on the buzzers, answers on the tips of their tongues. 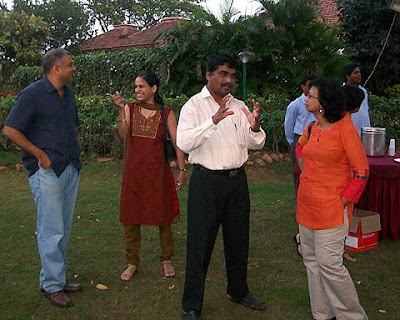 The crowd gets back to having a good time. 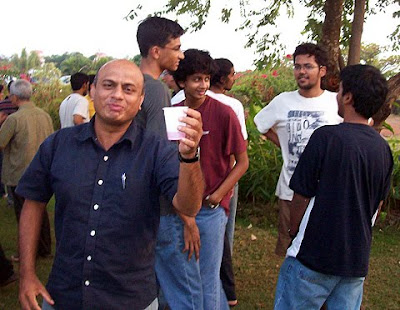 Sometimes too much of a good time -- if Sachin weren't a teetotaller, we'd be wondering about this photo. 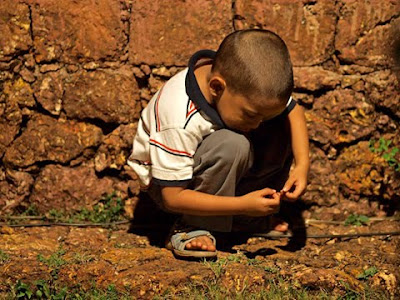 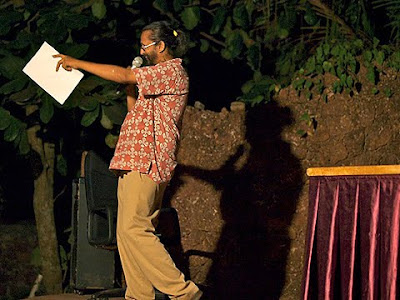 Annie does the MC dance... 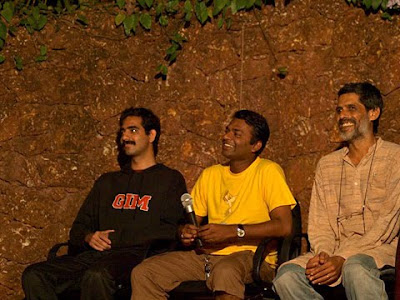 ...much to the amusement of the three idiots, sorry, finalists.

Tense times in the hot seat. 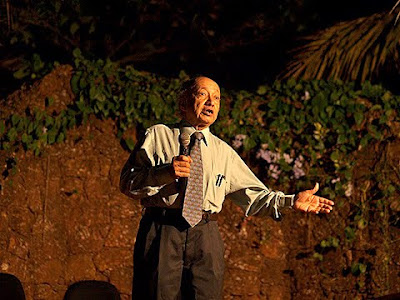 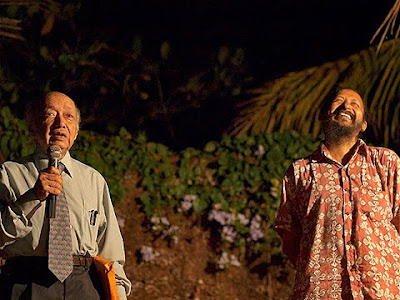 ...and ends the day with a smile. The crowd, though, you can't see it here, has a good time.
The photos featured here have been taken by Roberta Bensky, Jatan Rodrigues and Anjali Sen Gupta. To see more of Roberta's pix of the event, click here.
Posted by Anniesen at 6:01 PM 1 comment: 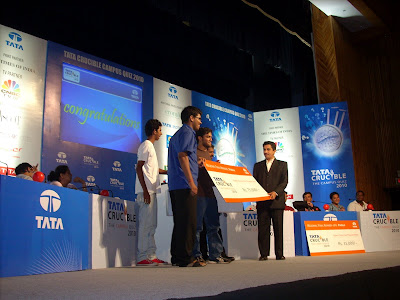