Posted by Rajiv D'Silva at 6:47 PM No comments:

Chirag's short sojourn in Goa was a happy occasion for the rest of us, who got a taste of khatkhate, largely thanks to Master Chef Harsh. The latter proposed the menu -- a multiple QM spread -- and various cooks got together and managed to put together a broth that sated all those who partook of it.

Harsh also surprised the group by bringing in a guest chef in Prajal Sakhardande, historian, activist and, as Harsh put it, 'war hero'. Those of you in the know, shake your heads wisely now; those who don't know the context, do a Google search.

There's nothing that makes a jaded quizzer quite as happy as welcoming a first-time QM . It's something like, I guess, a vituperation of vampires (yeah, that's the collective noun for them, look it up) might feel when someone new gets bitten. And this quiz had three new victims -- Tallulah, Nitash and Chirag -- as far as SEQC quizzes go. Three young journeymen -- Jayant, Aashray and Gaurav -- were also added into the mix, courtesy Rajiv and Harsh's evangelism at the Mongini's quiz. Kanchan was new to the group, too, but I have this sneaking feeling we aren't going to see much of him after this one (I'd be happy to be proved wrong).

Prajal, who was invited to start spicing the dish, doled out large dollops of Goan history, which were quickly gobbled down by his wife and fellow history buff Anju, getting her team (at that stage limited to pillion-rider Chirag) off to a flying start. Annie's round was a connected-clues round -- a sneaky way to get past the 18-question limit, as his six questions consisted of 24 clues. With most of the questions being cracked on the first clue and therefore fetching teams 40 points each, this round helped the Gadgil-Tallulah-Jayant combine get within spitting distance of the first-round leaders. Rajiv followed with 12 questions with no twist; then Harsh with 18 of his own. After the break, it was the turn of, in sequence, Tallulah, Nitash and Chirag.

The lead see-sawed between the Gadgil gang, and the Chirag conglomerate , which had Aashray added to it after Anju and Prajal had to leave midway through the quiz. Eventually, with Chirag doing the QMing for the final round, Gadgil-Tallulah-Jayant drew ahead to come up top of the heap.

Like any good feast, the Khatkhate quiz carried on well into the night, and it was a sated group that broke up at the end of it all.

Annie's questions have been uploaded to the files section of the SEQC mail group. You can access them here:
http://groups.google.com/group/seqc-goa/files/090125-khatkhate-annie-qs.rtf
Posted by Anniesen at 6:03 PM 2 comments:

The Khatkhate quiz turned out to be a swinging affair. Somebody will (hopefully) in due course put up a full-fledged review, but here are the results:

This was an 'unofficial' one, so the league table positions stay the same. We return to regular programming on February the 8th. Watch this space for more details.
Posted by Rajiv D'Silva at 10:11 AM No comments:

Bowing to public pressure and lobbying from certain quarters in Bangalore, SEQC has decided to have an 'unofficial' quiz this weekend. More power to us!

SEQC Quiz 8.5
Date: 25th January 2009
Time: 5.00 pm
QM: Multiple QMs actually, each one doing one or two rounds each. Those on board so far are Hash, Annie, Chirag, Tallulah, Sirish & Rajiv, but I wouldn't rule out more. Get your own sleeping bag, this could take all night.
Flavour: As the title suggests, it will be a multi-flavoured experience. Khatkhate a la mode, maybe.
Place: Rajiv & Tallulah's place, Panaji.
How to get there: Refer to this earlier post.

There Will Be Blood

'Twas brillig, and the slithy toves... No, sorry, that's a different story.

This story is set in Aldona, and is remarkable for the number of new characters it introduces to the cast of the Sunday Evening Quiz Club. Sirish (whose presence was thanks to a chance meeting with Annie at an early-morning illicit fish stall), Kaushik, Walter, Kanwarjeet, Anant, Eirik and Sandhya were all making their debut, and some others -- Pravin, Sunil, Yashodara -- had only attended one SEQC quiz prior to this one. To top it all, Savio was a virgin as far as SEQC QMing is concerned.

So much new blood in the new year, some blood-letting was to be expected. But though he'd vowed 'Revenge', Savio turned out to be not as bloodthirsty as expected. More omphaloskeptic (look up the July 2008 quiz, in case you're wondering) -- his themed rounds focussed on personal preferences, which evidently didn't match those of the loudly-protesting PD. So we wound our way through 'dogs' and 'pharmacy' towards the promise of 'sex', but were cruelly let down when that turned out to be some punk Pistols shooting blanks and a rooster with a falsetto voice.

Sidebar: You know the difference between a young boy and an old man? One has a falsetto voice and the other has a false set o' teeth. Bet you expected that to be dirty, Mariette :-D

In the final analysis, the questions were eye-opening, the competition was nail-biting (see the final scores below), Savio's lead-ins were head-scratching and the spread, thanks to Janice, was waist-enlarging. A sensuous, sensual treat to start 2009 off.

PS. Shouldn't forget Breezer, who breezed in and out from time to time, garnering squeals from some and screams from others.
Posted by Anniesen at 10:26 AM 1 comment:

The first quiz of the year was a hugely enjoyable affair. Annie's review will be up soon, so I'll stick to the bare results: 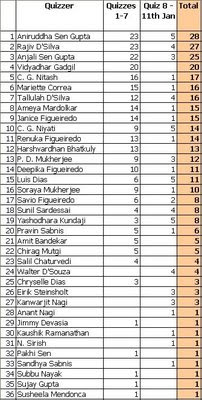 The next quiz will be held on the 8th of February, Annie to QM at PD and Soraya's place at Bambolim. More details on a need-to-know basis.

At the last SEQC quiz of the old year, Savio exuberantly threw his hat into the ring and volunteered to host the first one of the new year. Rather chillingly for the rest of us, he has promised that this one will be titled 'Revenge'.

SEQC Quiz 8
Date: Sunday, 11 Jan 09
Time: 5.00 pm
QM: Savio Figueiredo
Flavour: General
Place: The Figueiredo House, Aldona.
How to get there: In his own words - "It is very easy. Come to Aldona Market and you will see a Bronze statue . My house is right behind this statue. Alternatively you can ask for Rendeep Cyber Cafe or Savio , the latter is very notorious in this area." Hmm. One imagines his notoriety will only increase once this quiz is done.
Who can participate: Anybody and everybody. If you've never been to one of our quizzes before and need to be convinced, call Rajiv on 9890141715.
Posted by Rajiv D'Silva at 4:25 PM No comments: