A record 23 quizzers participated in Quiz 4, including one who came all the way from Bangalore just for the quiz! As it turned out, Chirag found the travel well worth his while as he and his teammates Pravin, Luis & Renuka stormed their way to an emphatic win. 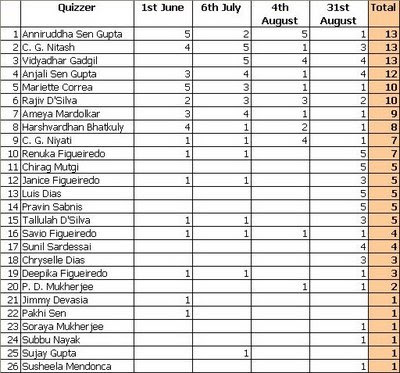 The next quiz will be conducted by Ameya Mardolkar on the 5th of October. Watch this space for details.
Posted by Rajiv D'Silva at 11:40 PM No comments:

Barring any major natural disasters or terrorist attacks, the next meeting of the SEQC will take place this weekend. I must warn everyone that this one has all the makings of a LONG one, so please get there on time.

Date: 31st August 2008
Time: 5.00 pm. (The quiz will start at 5.30 sharp, allowing for 30 mins to form teams and engage in idle conversation)
QM: Rajiv D'Silva
Flavour: General
Venue: Rajiv & Tallulah's place - 4T4, Dukle Residency, St. Inez - Panaji
How to get there: If you're driving from the Panaji side, come to the high-mast lamp in front of Madhuban Building, and go straight at the Y-junction. About 500 mts. after the junction, just at the s-turn is a beige-ish building on the left-hand side called Dukle Residency. Come up the 4th staircase to the third floor. If you're not the first to arrive, you'll probably hear some raucous laughing. That means the 'idle conversation' part is underway.
Alternatively, ask for where 'Branco Restaurant' is - its a minor landmark in the area. Our building is bang opposite it.
If you're driving from the Taleigao side, take 'Jennifer Monserrate Road' - the new road that connects the Taleigao Church to St.Inez - and the building is the first one on the right hand side after the fields stop.
Here's a wikimapia link as well.
If you still manage to get lost, call me on 9890141715.
Posted by Rajiv D'Silva at 4:05 PM No comments: 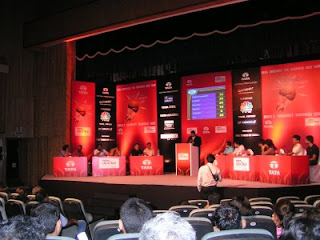 The scene at the NIO Auditorium - Goa's first big-ticket quiz! 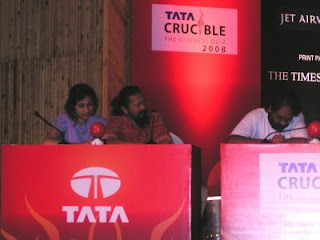 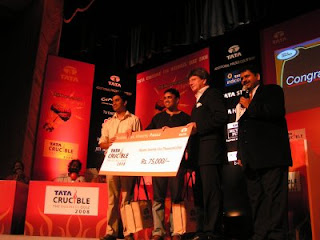 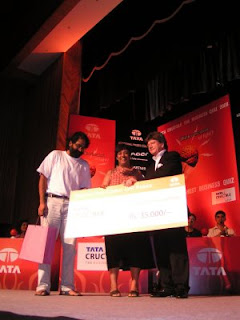 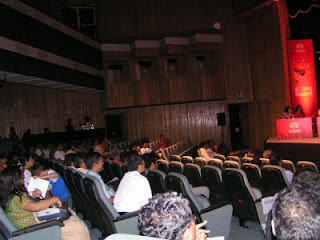 The audience that braved the wettest day of the year to turn up. (Including a nattily-dressed Gadgil, seen if you zoom in real close)
Posted by Rajiv D'Silva at 11:14 AM No comments:

SEQC put up a super showing at Goa's inaugural Tata Crucible quiz, with Rajiv D'Silva and Harshvardhan 'Hash' Bhatkuly making mincemeat of the competition to win the Regional Finals. Representing Savoir Faire, Rajiv and Hash, who were last year's national runners-up, finished with 85 points, while the second-placed team (from Synapse) ended on 30 points.

The event, possibly Goa's first big national-level quizzing episode, was heralded by torrential rains. Some 20-25 teams braved the monsoon storms to troop wetly but hopefully into the beautiful shell-shaped auditorium at the National Institute of Oceanography. The 25 questions which made up the prelims were of a reasonably general nature, and gave the less business-inclined quizzers some hope of doing well.

Besides the SEQC two, the four other teams who made it to the final stage were from Synapse, HLL, Betts and Cajetan Vaz. The first round, one of general quizzing, saw some even competition, with several of the teams managing to get on the scoreboard. At the end of it, Rajiv and Hash were behind for the only time in the contest, not yet having scored. Annie and Anjali were fortunate to have an answer more or less thrust down their throat by the quizmaster, which got them their solitary points for the evening.

The second round -a buzzer-driven one on questions related to the Tatas -was where Savoir Faire really got going, with Hash and Rajiv gobbling up four of the five posers to get their team ahead. From there on, it was a one-team show, as the two of them steadily increased their lead, while the rest of the teams more or less joined the audience and watched in appreciation of this quizzing masterclass.

There were four other rounds -including one of audio-visual connections; one of code-busting, which involved identifying logos and people photos and then doing some word gymnastics; and one of multiple-clue questions, none of which progressed beyond the first clue.

At the end of the quiz, quizmaster Giri Balasubramaniam acknowledged the role of Rajiv and Hash in bringing the Tata Crucible to Goa, saying that it was largely the result of their excellent showing in previous editions -which they had to go to Pune to participate in -that drove the organisers to choose Panjim as one of the new venues this year.

So Savoir Faire, already richer by Rs 75,000, besides the DVD players and other bric-a-brac, is off to the National Finals, whose date and venue are yet to be announced. Wherever and whenever it happens, here's hoping they end this year's edition on a truly SEQC note.
Posted by Groucho at 3:56 PM 1 comment:

That was another enjoyable evening! Many thanks to Hash for a great quiz which was right up there in terms of quality and also parity, I must say. Also great to note that the alcohol content of the quiz was right up there too, the poisons this time being led by some great Coorgi pineapple wine. Cheers to that!

Which means that Annie has re-taken the lead at the the top of the league table, with the Correa-Gadgils hot on his heels...(For those who came in late, league points are awarded as follows: 5 pts for a 1st place, 4 for 2nd, 3 for 3rd and 1 for participating. 2 pts are awarded to the quizmaster)

The next quiz will be conducted by yours truly on the 31st August 2008. Be there!
Posted by Rajiv D'Silva at 1:07 PM No comments: