The final, verified results of The Big Q are finally out. 86 people participated in all, 46 in the Open category, 17 in the College category and 23 in the School category. Venue-wise, Panjim had 43 participants, Margao 24 and Vasco 19.
And... The BiG Q for the year 2009 is... (drumroll) - Annie! Here are the rest of the top finishers:

Find the complete scores here.
Find the questions & answers to The BiG Q at these links - Section I, Section II.
Posted by Rajiv D'Silva at 11:06 PM 4 comments:

Panaji: Lecture Hall No.2, Goa College of Pharmacy, 18th June Road
Margao: Holy Spirit Institute, Behind Holy Spirit Church
Vasco: St. Andrew's High School, Next to St. Andrew's Church
All participants are requested to report at 10.00 am. The quiz will begin at 10.30 am sharp. Please carry a pen/pencil/crow quill.
Posted by Rajiv D'Silva at 10:48 AM No comments:

Sachin at the Bat

A report on the September 2009 SEQC Quiz
by Aniruddha Sen Gupta
There was tension in the air
As Sachin came out to play.
The laptop was on the blink,
The projector gone astray.
It was two down for nothing,
But the master blaster was cool;
For that's the kind of score
Our Sachin's faced since school.
The first question was fielded
To the tensely waiting crowd.
His second streaked through,
And the applause swelled loud.
Boundaries were soon stretched,
The scores soared ever higher
The crowd was on its feet --
Sachin was off to a flyer!
By the time the day was done,
And Sachin left the field,
His masterclass was legend,
Exquisite style revealed.
Back in the dressing room
The bubbly would be fizzing
For that's how it always is
When Sachin goes quizzing.
Posted by Anniesen at 1:25 PM 1 comment:

From a report prepared for The Herald by Aniruddha Sen Gupta

The poster promised "an action-packed afternoon of all manner of madness and mayhem revolving around the amazing worlds that exist in books". And that's exactly what the Great Big Book Fun Day, held at the Clube Tennis de Gaspar Dias in Miramar, Panjim on September 5, delivered.

The afternoon consisted of three events. The first, called Mixed Mysteries, was for children from classes 1 to 4. It was an uproarious affair, with kids rushing from clue station to clue station to put together book covers, which were given to them as puzzle pieces. "Our attempt," explained Sujata Noronha, one of the organisers of the event, "was to bring in various aspects of learning that a kid could use. So there was a challenge that required them to come up with synonyms for words, while another one used visual clues for them to work out." 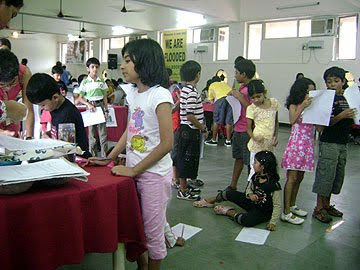 The Mixed Mysteries compelled kids to think, deduce and act upon their deductions, a combination loved by the participants and appreciated by their parents too. Said one parent, who had accompanied her child from Vasco for the event, "I am glad I came all this way -- the Bookworm events get the kids to use their brains while enjoying themselves, which is such a rare feature of their lives."

Next came the Bookwise Quiz, an audiovisual quiz on books and comics, open to all students up to class 12. "The quiz was great," said Saloni Sardessai, one of the finalists. "The questions weren't very difficult, but they really required us to rack our brains. I enjoyed it like anything!" 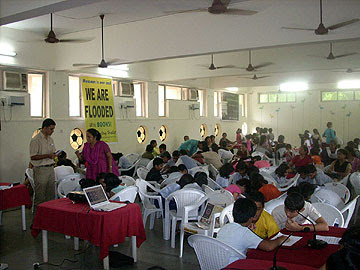 Smoothly conducted by Rajiv D'Silva, the Bookwise quiz was won by the team of Julian D'Costa, Ari Pereira and Shridhar Shirolkar, which stayed a step ahead in each round, but surged ahead in the final Rapid Fire round, with Julian answering all four of his questions on 'Tom Sawyer' correctly. The team of Aishwarya Shridhar, Chitra Mekoth and Jemimah Gomes came second.

The grand finale was an innovative quiz-based board game with the theme of 'Around the World in 80 Minutes'. Conducted by Savio Figueiredo, this component was for students of classes 5 to 8. The game required participating teams to travel around the world on a fixed route, answering questions based on the literature of the country that they landed on to go ahead. An element of luck was added through the throw of a die and other chance elements on the 'board', which was a route map projected onto the wall. "It was well-conceived, an interesting idea," said Yvonne Sequeira, whose son Alexander was a member of one of the six finalist teams. 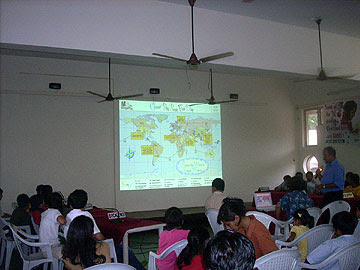 Pritha Sardessai, whose daughter Saloni was part of the runner-up team in the 'Around the World' event, was all praise for the idea too. "It set the books in the geographic location from which they originate or in which they are based," she said. "This makes it more real for the kids, and gets them more interested in reading." Her son Shaunak, she feels, has got a tremendous headstart since she enrolled him at Bookworm, because of "the knowledge of books and love of reading it has given him".

The 'Around the World' event, too, was won by the team of Julian D'Costa, Ari Pereira and Shridhar Shirolkar, with the team of Sahil Prabhudesai, Saloni Sardessai and Sapna Nayak coming in second. The winning team's double feat was particularly impressive considering they were competing against far more senior teams. If there had been a 'Player of the Day' award, Julian D'Costa would have won it hands down.

The Great Big Book Fun Day was organised by the Panjim-based not-for-profit Bookworm library, whose aim is to foster a love of reading among children. The quiz and game content for the senior events was developed by the Sunday Evening Quiz Club, Goa's fledgling but very active quiz club. The Reading Habit, the much-loved Panjim bookstore, and stationery producers A.W. Faber Castell sponsored prizes for all participants. The women's wing of the YMCA had set up a snacks stall at the venue.
Posted by Anniesen at 1:16 PM No comments: 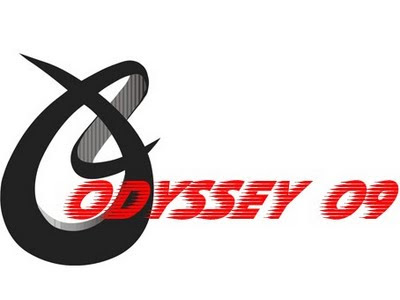 As part of Saraswat BBA College's festival Odyssey 2009, a business quiz will be held on the 17th-19th of September. Participation is unfortunately restricted to only those colleges taking part in the larger festival, but those interested are welcome to join the audience.
Turbulence - The Business Quiz
Date & time: Prelims on the 17th September at 7.00 pm, Semi-finals on the 18th at 7.00 pm and Finals on the 19th at 3.30 pm.
QM: Rajiv D'Silva
Content: QuizCo
Flavour: Business
Venue: Taleigao Community Hall, Taleigao
Posted by Rajiv D'Silva at 4:54 PM No comments:

The BiG Q – Call for entries

Time: 10.30 am (Please report at 10.00 AM)
Content set by: Rajiv D'Silva
Format: The BiG Q is a solo, written quiz event. Participants will be asked to answer 120 questions within 90 minutes.
Flavour: General
Venue: The quiz will be held simultaneously in Panaji, Margao & Vasco. Exact venues will be finalized soon.
Participation: Open to all. Prizes will be awarded in three categories - Best School Quizzer, Best College Quizzer, and Best Quizzer in the Open category. To register, send an email to rajivdsilva@gmail.com, indicating which centre you would like to participate from. Also please mention your phone number and the category you are taking part in. Call 9890141715 or 9823362217 for details and clarifications. Last date for registration is 18th September 2009. Spot entries will be accepted, but since we will only print a limited amount of the question sheets based on the numbers that register, these will run the the risk of not being able to participate.
Prizes: We're working on it, but there almost certainly will be some.

Posted by Rajiv D'Silva at 1:35 AM No comments:

Sachin Chatte's maiden quiz had some of us chanting "Sa-chiiin, Saa-chin!" and I don't think his more famous namesake would have minded had he been there. Here are the results.

The next monthly quiz will be held on the 4th of October, to be hosted by Vivek Krishnan.

Here are the results of the two quizzes held at The Great Big Book Fun Day on the 5th of September. Both quizzes were won by the same team! A remarkable feat considering both were for different age-groups. The team led by little Julian D'Costa even scored a mind-boggling 20/20 in the written preliminaries of the Around the World in Eighty Minutes quiz! Phew!

Around the World in Eighty Minutes